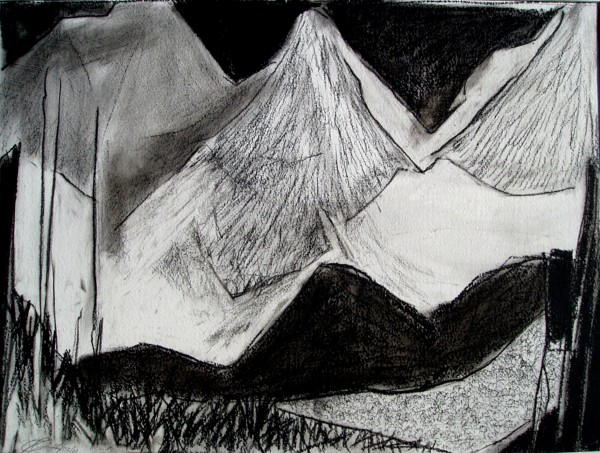 Here’s one from the archives.  This drawing was made in the studio after an amazing 4 day backpack along the Rockwall in Kootenay National Park, British Columbia.  Floe Lake is justifiably famous for its beauty…although it is much changed since I was last there as fire destroyed much of the forest in 2003.  Most hikers visit Floe Lake as the first night of the trip;  we did it the other way around and were glad we did, despite the agonizingly long climb — two passes in one day — to get there.  Though the entire trail is spectacular, the Floe Lake campsite is definitely the most picturesque with tent sites perched up and down the steep valley sides overlooking the lake and the glacier that feeds it.  We saved the best for last…and left ourselves a quick downhill hike out on the last day.

Good thing.  The Glenmorangie in the title refers to Glenmorangie Port Finish scotch whisky (sadly, no longer made), a dram or three of which was enjoyed on the pebble beach after midnight.  Quantities were limited, but after three days and four passes in full pack, it didn’t take much.  The totter back up the rocky trail in the dark to find our tents was, um, entertaining.  All hail the men of Tain!

So what does this have to do with hats?  Well.  Both my artist’s beret and my backpacker’s cap were trumped this week by my “mommy toque”.  This was the Friday we were finally going to get the last of my basement studio up the stairs, into the rental truck, across town, out of the truck and up the elevator to my already much-beloved new space.   Darling hubby even took a vacation day to help.  Alas, the boy has pink-eye.  So, no child care, hence no studio moving.  Also no studio working.   There is a bad painting of an apple (also an apple, hopefully not rotting) and a very nice start to Steam III waiting, but no me.  Sigh.  Such is the juggle.  But staying home helping my two-year-old master his first 12 piece jigsaw puzzle isn’t such a bad trade.

As to when we finally reclaim the basement?  Who knows…